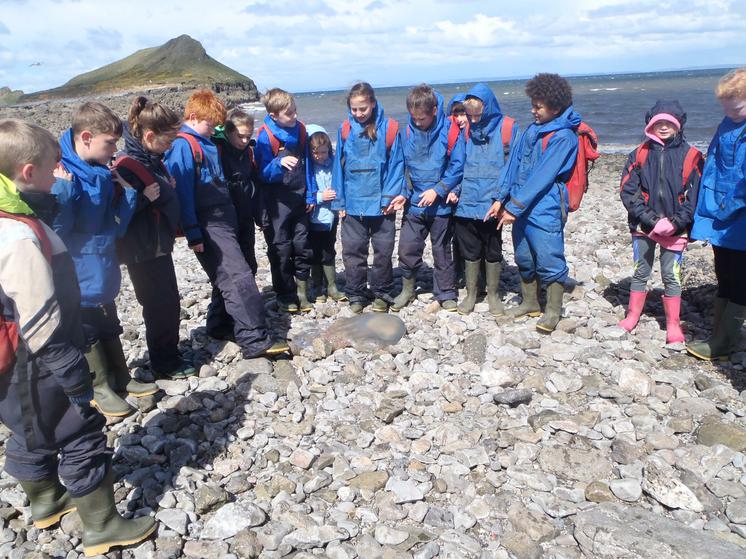 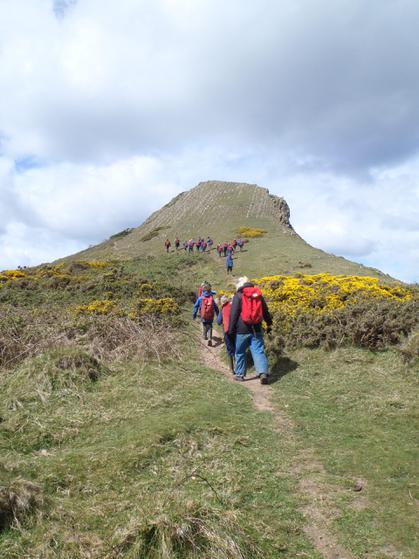 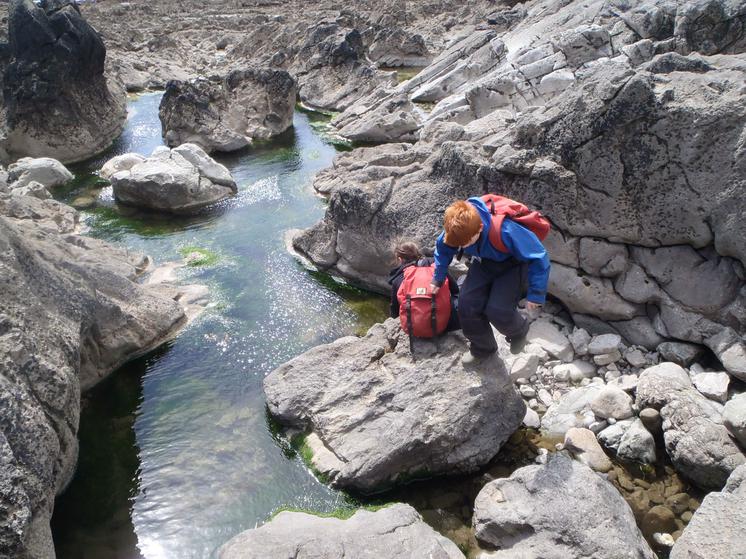 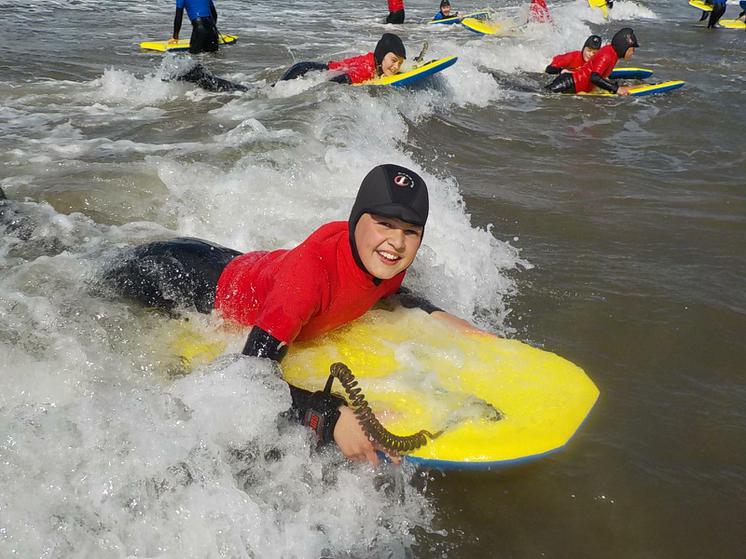 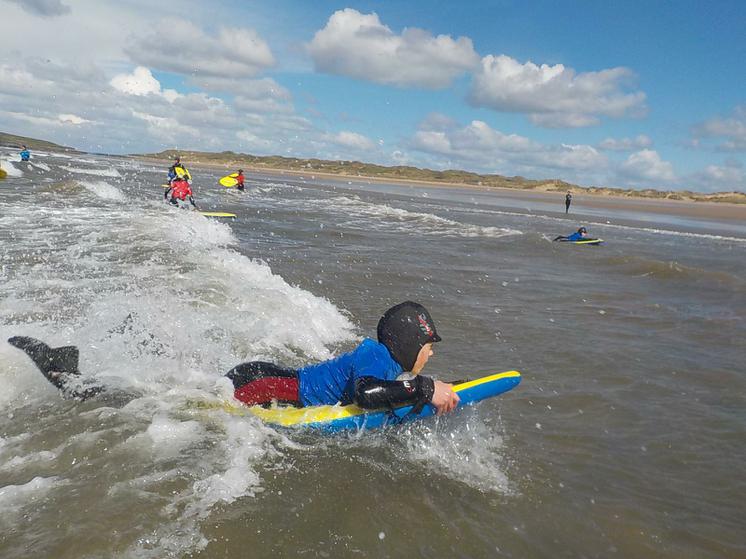 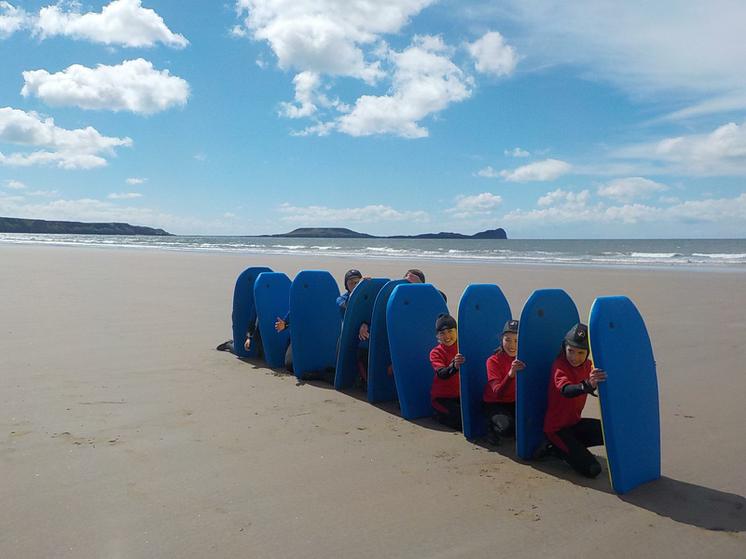 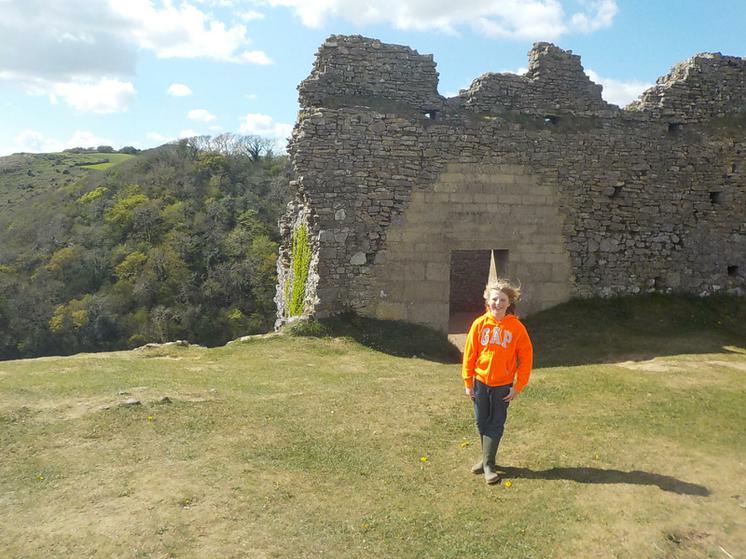 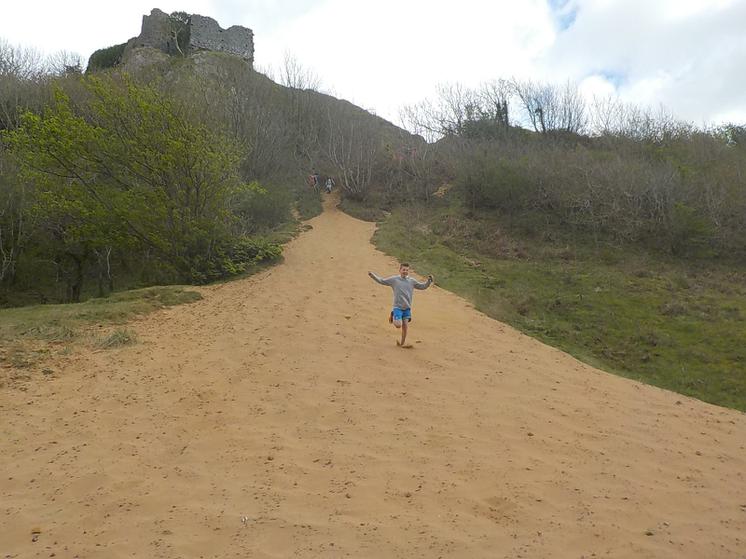 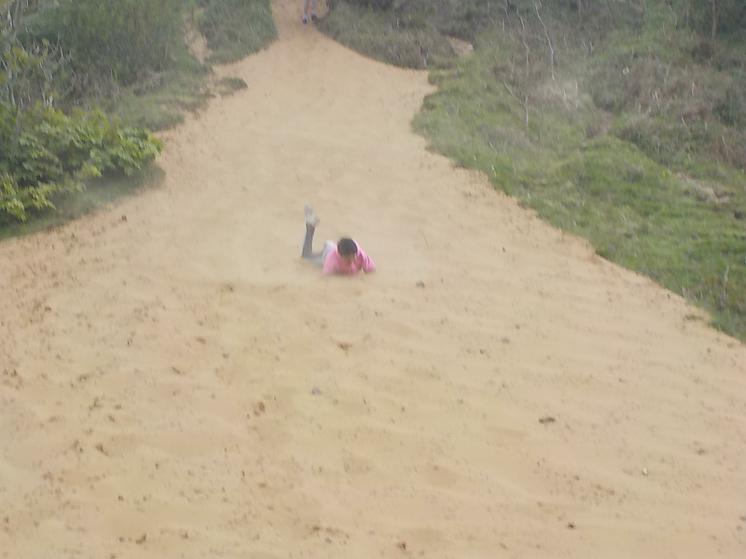 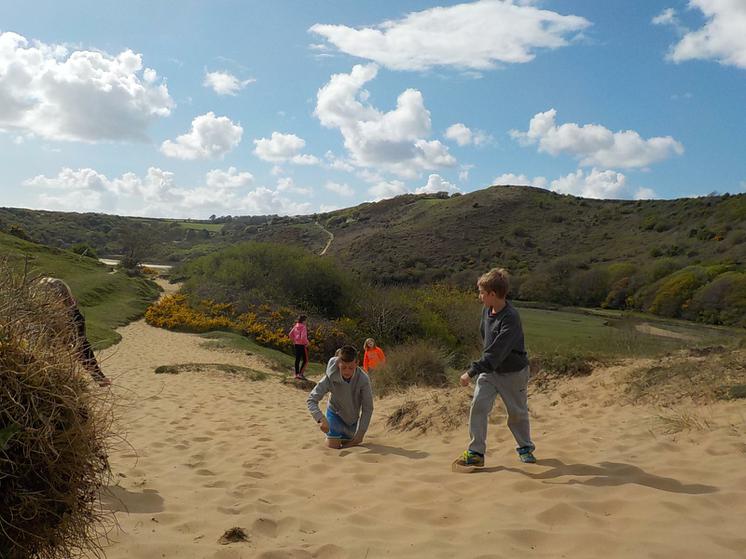 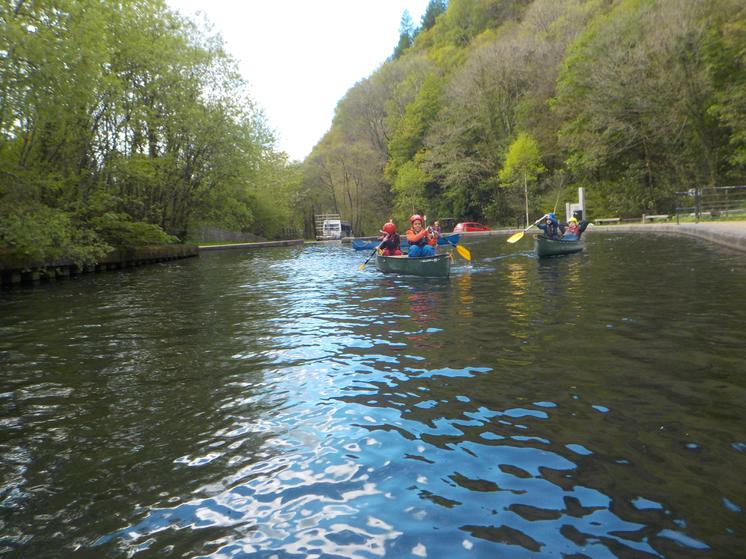 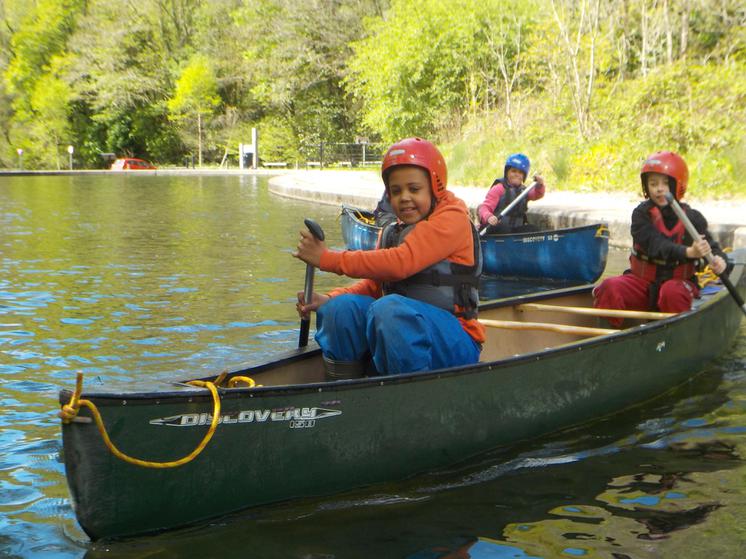 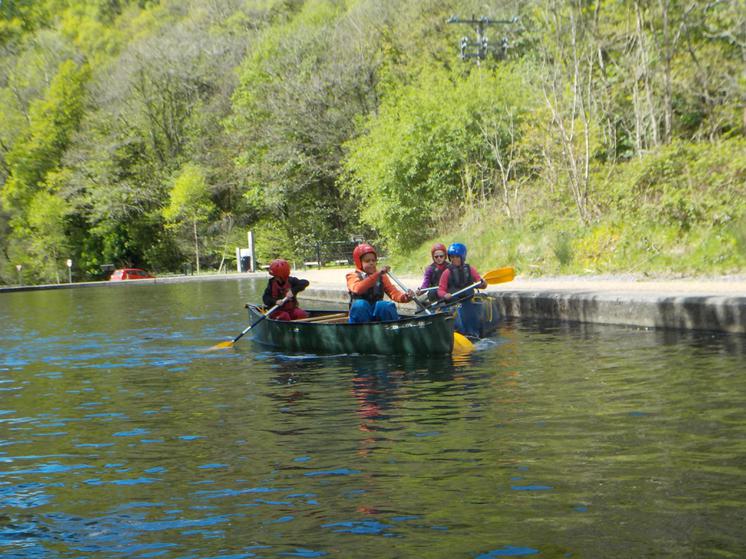 Good evening readers, parents and carers and welcome to day two of the Kilvrough Residential blog which I know you will have been waiting in hot anticipation for.

Domestic reports first of all: everyone in bed by 8:45pm last night - lights out by 9:00pm and the last time we had to go up to ask anyone to be quiet was 10:15 - that has to be some sort of a record for the first night! The majority of the children slept through until at least 7:00am and some even had to be woken up by staff. Breakfast went extremely well and was a very civilized affair after some minor social engineering and mixing up of various groups. Supper this evening was Spaghetti - Bolognese followed by chocolate cake / brownie and you've guessed it more squirty cream!

So today we had groups out all over the Gower taking part in a wide range of activities. Despite the forecasts, the weather has been really stunning although it has been quite windy and a bit chilly even in the sunshine. Becky Robert's and my group spent the first part of the day squeezing ourselves into wetsuits ready to brave the sea at the beautiful Llangennith Beach; we are apparently the first group this year to brave body boarding in the sea. The children were amazing and all managed 30 minutes in the water learning to ride the waves. Some even opted for a further 20 minutes while the rest of us sat underneath a parachute tent drinking hot chocolate. Tom Fane's group went on the first day's canoeing this year and managed something of a record when two of the boys stepped into their boat at the same time and fell into the water before the day had even started!

Because it was so cold, my group couldn't manage a whole day body-boarding, so after getting back for hot showers and food we spent the afternoon walking to a small ruined castle high up on the hillside over looking yet another stunning sea view. The great advantage of this for those geographers out there is that immediately behind the beach and running into the sea (and almost looking like it came from a geography text book) is the most perfect example of an exaggerated meander formation on a river, that you could ever hope to see!

Imagine my delight when the instructor asks the children whether or not they are able to identify the natural feature that they can see so clearly and perfectly laid out below. (They know this one - I taught them this in geography in our special study on the river Thames I think, come on, come on...). 'Is it a meander?' (Yessss bingo - nailed it Year 6!) Next question is asked - can anyone explain how a meander is formed? (Ooh - bit more tricky but we covered it in our lessons - come on Year 6 you can do it, you can do it...!") A perfect answer follows, not only explaining how it is formed but also using all the correct technical vocabulary... erosion...deposition etc. etc. (Bang on the money I think - well done Year 6 - my teaching isn't in vain after all). Then a surprise bonus question is slipped in - it's almost a gift...'So what natural feature is left behind when the meander becomes so exaggerated that the river eventually cuts across the thin stretch of land?' (It's in the bag I think - we covered this too - not quite part of the KS2 geography curriculum - a bit more GCSE but this will be the icing on the cake - ox bow lake I think...it's an ox bow lake...you know this you even drew a diagram of it in your project books...here goes...sheepish hand goes up...) 'Is it an ovary?!?' (Whaaat? Noooo, fallen at the last hurdle and Brigg goes back to have a think about how to more clearly delineate his relationships and life-cycles curriculum, from geographical features! Still nice try and it made for a hilarious end to the day.

So tonight the children are den building in the grounds of the manor - truly magical and the most inspiring thing to watch - especially in  grounds and woodland as beautiful as these. There's nothing like allowing children to really use their imaginations to create something in the outdoors that actually exists in real life and isn't on a screen. This, as well as seeing all the other team-building, negotiating and bonding skills that come into play are hugely rewarding. I'm off canoeing tomorrow so I'd better go and do my biceps exercises in preparation. More tomorrow and happy reading...only three more sleeps.