Well we've arrived, after a fairly uneventful journey on an unusually luxurious coach. Although I think it would be safe to say the driver took the scenic route. After an orientation tour of the building the children settled into their rooms and so began the hilarious task of unpacking, putting on bottom sheets and duvet covers! There were varying degrees of success and one dormitory had Lewis to thank who (obviously well trained) had put all their duvet covers on for them, one ingenious Year 5 boy had improvised a pillow case with a black plastic bin liner (I wonder what Lawrence Lewellyn-Bowen would have made of this foray into the world of interior design?!)

The afternoon was spent onsite doing problem solving games and activities with such weird and wonderful names as 'the holey pipe' - 'T swing thing' & 'up the spout.' I'll leave the children to fill you all on the details when they get back. The children have been working in their duty groups practising their hovering, tidying, table laying and clearing duties. The first mass meal times have also gone off well with only the merest hints of 'I can't eat that.'

For the first year I can remember we managed to get everyone in bed and asleep by 10.15, surely a record. No real homesickness to speak of, just a couple of tearful faces but Mrs Marshall soon cheered Mr Ashworth and me up. Today is the first full day of activities - I'm off to climb a mountain and Richard Ashworth is down underground - Tuck Hatz is set to be swinging from a zip wire with his group and Helen Taylor will be refining her canoeing skills.

So all well so far - weather is glorious and the setting is idyllic. Wish you were here?

Today the blog is written by Mr Ashworth. 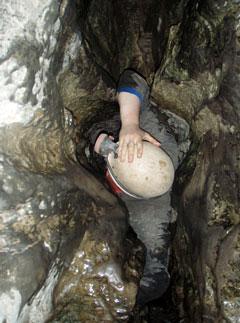 Having acquainted ourselves with the Woodlands estate yesterday, today was our first proper foray into the vast unknowns of the Welsh wilderness. Okay, vast may be a stretch, and judging from the amount of traffic, it�s far from unknown, but today the children in group 3 really did enjoy a wilderness experience.

We travelled by mini-bus to the eastern end of the Brecon Beacons National Park, and visited a cave by the name of Ogof Clogwyn. Here the children learned some valuable lessons about teamwork, and were able to lead each other through the various twists and turns as the children familiarized themselves with cave etiquette. The children did brilliantly and were then ready for their first challenge.

This involved all the head lamps being turned off, and the children then navigating in a line down a pitch black passageway. The children held on to the belt of the child in front, to ensure everyone was kept safely together. Anyone who has ever seen footage of naked mole rats navigating a tunnel, should be able to conjure up the appropriate mental image.

he children used communication excellently to ensure everyone got to the end, and the instructor was very pleased with their performance. 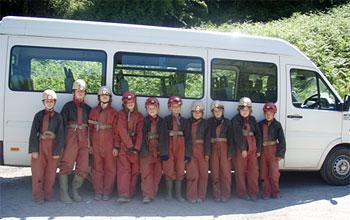 The second challenge saw the children navigate a section of cave on their own, and again their newly fostered team spirit came into play, as the children were able to rendezvous back with their instructor after their route had been completed.

The final and by far the hardest challenge was actually exiting the cave. This was done via a narrow shaft called the �toothpaste tube�. The name is particularly apt; as the passageway is very long and incredibly narrow, getting tighter the closer you get to the daylight. The children set off with a fair amount of trepidation, and Aisling was the first to depart, she made it through, and was soon followed by a string a children, including Harry Troughton, who had been an absolute star all day, constantly encouraging and guided others.

Finally it was my turn to provide the tail end of the line, and I set off hopefully down the tunnel towards the exit. Now if the children considered this a claustrophobic wriggle, then for me, it was incredibly tight, as despite my constant assurances to myself, I am bigger than I was when I was 17. I was unable to use my legs, as the children has done with their impressive frog motion technique, as there wasn�t enough room to use them, and instead had to drag myself forwards with my hands. It was more an �ineffective snake�, than an �impressive frog�, yet slowly I made my way towards freedom. I role played in my head, as I dragged my now dead weight body forward, to try to make sense of this nightmarish tunnel I was in. 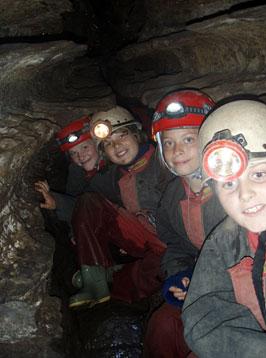 Perhaps I was a POW escaping from a prison camp, and yes, there was freedom just ahead. I could now see the children�s faces cheering me on, when �clunk� I was wedged fast. My battery pack for my light was stuck behind some rock. Unfortunately my arms were outstretched in front of me, and there was no way to reach back. I was just about to demand that our instructor produce a pneumatic drill from his modestly small backpack, when I managed to twist it free. All the children departed the cave, ecstatically happy. Tomorrow we take to the high seas (AKA the River Wye). 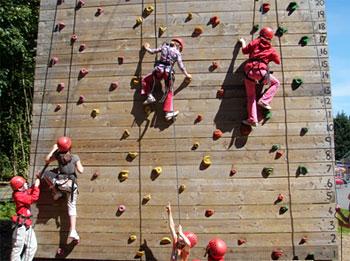 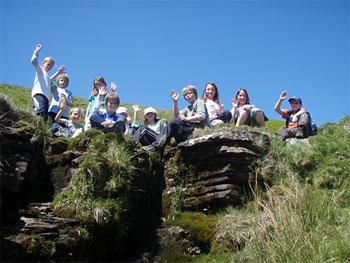 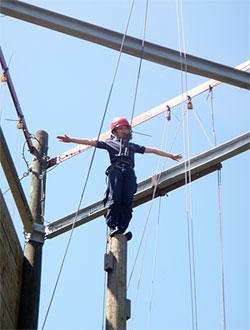 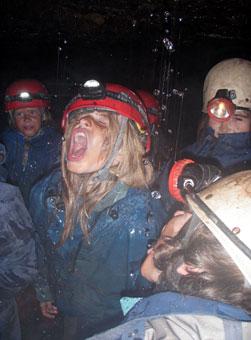 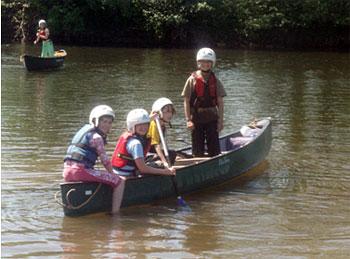 Group 4 were like a bunch of gecko�s running up and down the climbing wall with several of them actually making it to the top, a tremendous effort considering some of them had never been climbing before. The zip wire produced screams so loud I�m surprised the dragons living in the black mountains weren�t disturbed with everyone having a go and a few managing to sneak in a few extras. The leap of faith tested the nerves of all, a great day all round, the caves tomorrow�